How To Get The Best VoIP For Your Business

How to create a VoIP network?

Businesses of all sizes are moving to VoIP for the phone systems. Reducing the cost of phone calls while gaining features is a win-win situation. Conferencing, smart forwarding, and enhanced voicemail let employees get more use out of their telephones.

For a business with an existing PBX, though, the cost of replacing its phones is a concern. Traditional phones cant plug into a data network. SIP phones connect by Ethernet or WI-FI to the network and offer lots of new functionality, but replacing all the existing telephones adds to the cost of switching over.

An economical alternative is to replace just some of the handsets with SIP phones and buy analog telephone adapters (ATAs) for the rest. Many employees don’t need to do more than make and receive calls, and an ATA will let them use their existing phones on the network. They may be more comfortable keeping a familiar phone rather than getting one full of buttons they won’t use. Touch-tone operation can give them access to some of the advanced features even without a VoIP phone.

Using an ATA with a fax machine, rather than replacing it with a VoIP-compatible machine, can be especially cost-effective. Make sure the adapter is one that works with fax devices.

Even if the long-term plan is to replace all the phones, using ATAs can spread the cost out over a period of years. The employees who most need the enhanced features such as sales and support people, can get them first. Spreading the cost out over time will make the transition easier. 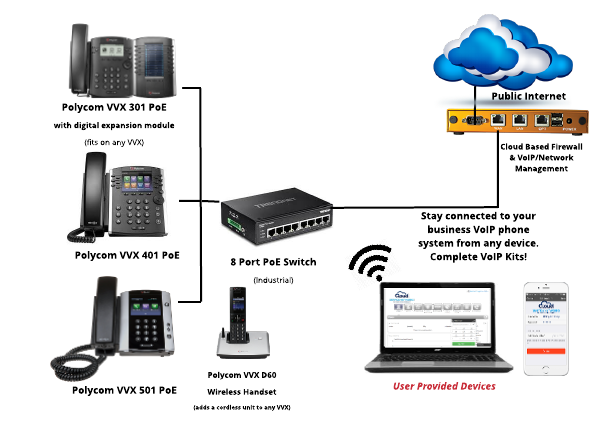 How to create a VoIP network?